Joe and Tammy in New Mexico

Welcome to San Pasqual’s Kitchen!  I’m Tammy Renea. In August of 2013, my husband and I went to visit my husband’s uncle in Santa Fe, New Mexico.  On one of our outings we traveled to the Sanctuario de Chimayo.  It was a lovely church in the valley of the Sangre de Christo Mountains north of Santa Fe.  After going through the sanctuary, we walked into the anteroom where an entire wall was covered with pictures of soldiers, sailors, airmen and marines.  Many of the pictures were accompanied by hand written prayers for safety and protection.  At this time, both of my sons were at war in Afghanistan.  I was moved by all the pictures and could imagine the hands of mothers, fathers, brothers and sisters that might have written out those prayers.  I added mine to theirs and a connection to this place began.

We walked over to the Potrero Trading Post.  This family store sold the much coveted chiles of New Mexico, and I had to have some of this precious spice to take home with me.  As the owner’s daughter was telling us some of their history, I noticed all the retablos of a Franciscan monk in a kitchen.  I was told he was San Pasqual, the patron saint of cooks and kitchens.  San Pasqual has been attributed as saying, “I joyfully celebrate the food I’m given.  May it deeply nourish everyone that I feed.”  That’s when the inspiration hit me, San Pasqual’s Kitchen.  I had been thinking for some time about starting a food blog and this little quote served as my inspiration.    It sums up my passion for food (a joyful celebration of it!) and the nourishing qualities I sought when preparing it.

It is my hope that this blog will become a meeting place like most kitchens are.  A place to meet and talk about food and life and our navigation through both.

I'd love to hear from you! Cancel reply 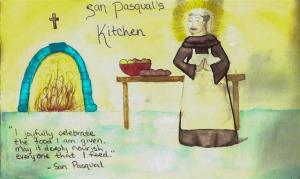